With all the story tellers in this book, we can only wonder about what else they could tell us and John is no different.

The disciple John and his brother, James were the sons of a well-to-do fisherman, Zebedee and his wife, Salome, thought by many to be the sister of Mary, the mother of Jesus, and companion of Mary Magdalene, Joanna, Susanna and other followers. Cousins of Jesus and called ‘the Sons of Thunder’ because of, at times, their impetuous behaviour (Luke 9:49, 54) and outlandish requests (Mark 10:35-45), John and James were key figures among the central group of twelve.

Together with Simon Peter, John and James were often to be found with Jesus, but without the other disciples: at the healing of the daughter of Jairus as we’ve seen; on the mountain at the time of the Transfiguration and then again in the Garden at Gethsemane. It was John who ran to the tomb with Simon Peter at the behest of Mary Magdalene that first Easter morning.

The authorship of the three New Testament letters that bear John’s name and that of the Fourth Gospel has been subject to debate for centuries. If John, ‘the disciple whom Jesus loved’, wasn’t the actual writer then he was almost certainly very closely associated with it. Similar debate has surrounded the issue of whether or not John is in fact ‘the disciple whom Jesus loved’. Apart from a brief reference to the sons of Zebedee (John 21:2), John is not actually named in the eponymous Gospel so if he was the author then it would seem not unnatural to refer to himself in the third person (in the same way perhaps that the author of Mark’s Gospel appears to do so [Mark 14:51-2]).

As the writer of this website is no academic theologian, for the purposes of this story, and for simplicity’s sake, we will assume the potentially incorrect approach that John was the author and also the beloved disciple. There again, as we consider what we can learn from this particular story, the uncertainty over the exact identity also begins to pale in to insignificance.

John, the disciple whom Jesus loved, is not saying in his writings that Jesus loved him more than the other disciples. If we are learn at least one thing from this particular storyteller, it is that he knew he was loved.

We may experience, give and receive such love in many different ways. It’s well recognised that, by looking at the Greek, the Bible indicates four different types of love:

For John, the disciple whom Jesus loved, the Greek has the word agape on four of the five occasions that that sobriquet is used: John 13:23-25, 19:26, 21:7, 21:20; whereas in John 20:2, phileo is used. It’s partly a stylistic approach but is perhaps also a further indication that John knew he was loved by other people and, as we will see later, that he was also loved by God.

Expressions of love based on eros are felt most strongly within loving, sexual relationships, which we should acknowledge are not experienced by everyone. Arguably, the vast majority of people will both give and receive love which stems from storge and phileo, although they are not without complications at times either. As we will see later, agape love is that which is perfected in God but there are times when it is given and received from other people also.

What’s happened in the last week that showed you that you are loved by other people?

Using storge, phileo, eros as headings, write lists of the ways in which you receive and give these different types of love. 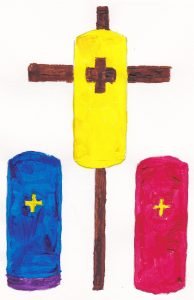 Agape. This is the God who loves you.

In the above passage from John’s first letter, in the Greek, the love that is talked about is agape love. We are to love, agape, one another. God’s love for us is agape love. Love that is perfect, unconditional, sacrificial, and pure.

So, how do we really know we are loved by God?

We can trip the familiar words off the tongue, can’t we: ‘God is love’… ‘God so loved the world…’ ‘God showed his love for us in that while we still sinners Christ died for us’… ‘(nothing) can separate us from the love of God’. There are so many affirmations of the truth and what reassuring and comforting words they are.

It can often be easier to acknowledge God’s love for us when life is going well. Times when his love for us is tangibly demonstrated through answers to prayer, unexpected blessings, love from others – again, so many ways: and how reassuring and comforting they are too.

With practice, as we reflect on through Mary and Joseph and also Martha and Mary, we can see God’s love for us in all the ordinary things of life. Those moments of blessing. Those glimpses of glory. A sunset, a bunch of flowers, children playing, older people laughing, a dog running in to the sea. Those times when God says: ‘Look. That’s for you.’ When the peace of God passes all understanding.

But what was it like for John walking with the distressed and agitated Jesus to the Garden at Gethsemane (Mark 14:33)? And standing at the foot of the Cross helplessly watching the helpless Messiah whom he loved and who loved him. Standing alongside Jesus’ own mother and others contagiously grieving their own sorrow and distress (John 19:25b-27)?

While it may have been the case during the preceding three years and was definitely so later in John’s life, at this precise moment, standing at the foot of the cross, in the midst of the trauma and pain, there is no room or energy or desire to reflect on God loving him so much that he sent his son to die for him.

In the reality of our lives, how do we know we are loved by God, truly know, deep down inside, when life is tough and horrible?

Ah, if only there was a simple answer.

And there isn’t. And maybe accepting that fact is helpful in itself. Knowing God’s love and his presence in difficult times is in itself difficult.

The person you are is the person God loves and wants you to be. Think back to the first Easter morning and all that was encapsulated in that one word, that calling of a name: ‘Mary’. Jesus calls your name, for you are his, and that is who you are.

We, like Mary and like John can know the love of God simply through the calling of our name – and thankfully God’s love is much bigger than that too.

Returning to your lists from part 1, write down the ways in which you receive God’s agape love.