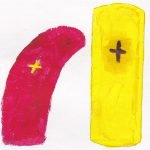 After the resurrection, Thomas wanted to be sure. He wanted to see the evidence.

Poor Thomas. It must have been a difficult week. The other ten disciples and followers, including the Marys, would have been full of the fact that Jesus, their beloved Lord was not dead but was alive (and no doubt also a bit confused by it for themselves, one expects, although they may not have admitted that to Thomas).

In the high emotion of the situation, Thomas could have easily left the rest of the group. But he didn’t. He stayed with them. Listening to them, eating with them and praying with them.

Even so, Thomas must have spent that week wandering around, questioning the words of his closest friends, waiting for Jesus to appear around a corner. What a very long week it must have been. A week of uncertainty. A week of hope, fearing disappointment. A week of shame because he could not bring himself to believe like the others did. A week of waiting.

There are times when we want to be absolutely sure of something aren’t there? When we want evidence to clear up the confusion and the doubt. Some people have even likened Thomas to that of a scientist.

Thomas was fortunate: he had Jesus right there in front of him. How we would all long for such an experience! Yet note Jesus’ words in John 20:29. Thomas now believed because he had seen Jesus once again – and Jesus tells him how much greater is the blessing for those who believe without seeing him.

We, with all our doubts, come to Christ in the knowledge that we have not seen him. We come to Christ in faith, trusting that, in the balance of probability, he is alive and he is with us. He takes those doubts, that faith and that trust and he blesses us.

How else can we respond but by saying ‘My Lord and my God!’

Now write a list of those things – anything you like: faith, life, work, whatever – which cause you to respond: