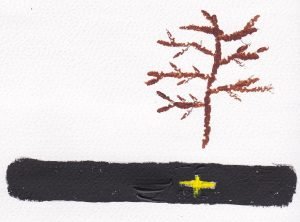 When someone takes their own life, the impact on those left behind is devastating. When it’s a terminally ill 92 year-old care home resident who takes her life a few weeks after her husband died, one can to an extent understand why she might have chosen to do so. But all the same it is devastating for family and the care home staff alike. When a 32 year-old’s life is turning around after years of depression does so, it shatters parents, siblings, friends and healthcare professionals who supported them alike. Everyone is left drowning in a pool of despair asking ‘Why did they do it?’ ‘What else could we have done?’ ‘What did we do wrong?’

Coming as it did just hours before Christ himself was crucified, for the remaining eleven disciples and the others who followed Jesus, Judas’ death would have been devastating. Yes, he had his fingers in the purse. Yes, he walked in to the garden at Gethsemane and handed over the Messiah. Yes, he had betrayed not just Jesus but that whole group who had gone through so much together in the previous three years. After all, he’d witnessed healings and miracles. He’d listened to the teaching. He’d walked and prayed. He was given the same authority to minister to others as the rest of the disciples. He’d had his feet washed. He received that first communion. Judas had become a friend. A close friend. And then he did that.

Although we do not know the full facts, Judas took his own life out of remorse for the sheer magnitude of what he had done. He condemned an innocent man to death. His suicide was perhaps as impulsive as the act of betrayal. In the end, Judas betrayed himself completely.

Although there is often a link between suicide and mental ill health, three-quarters of those who end their own lives are not in contact with mental health services. Despite the ‘protective factors’ someone may have in place (e.g. a partner or children; receiving and accepting support) the desire to end their own suffering (whatever that may mean for the person concerned) and the burden they believe themselves to be for others, it all becomes too much and they make a decision to end their life.

In that most poignant of paradoxes, the making of that decision often results in the person feeling calmer than they did before. The end is now in sight. And for those of us left behind, there is, in most cases, probably nothing more we could have done.

For those bereaved by suicide, the loss is great. A loss as great as any other death, arguably more so in some circumstances. Those left behind may feel betrayed. They may feel angry with the person who has taken their own life. All the love they gave them. All the time and effort they spent. All the worry and suffering they went through… and then they did that.

Such feelings are natural and normal.

The pain will last and the healing may take a long time. The good memories remain but the loss is deeply felt. Everybody’s journey through grief is different – we all react in different ways and the way one person deals with it is different from another. The methods one uses to deal with such loss will be different and what works for one person doesn’t mean to say that it will work for (or needs to be used by) another person. Grief impacts people in different ways but that too will be different and is not necessarily the same for each. Within all of that, each journey is a valid one and to be respected.

Help for those experiencing suicidal thoughts is available through The Samaritans or by contacting emergency medical services. 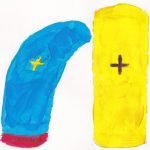 While not named, Mary was probably among other women who gathered for the Last Supper and then moved on to the Garden at Gethsemane – and she was certainly involved in what followed.

Like many of us after a death, Mary Magdalene visited the place where her loved one was laid. It was night. She knew she could go there in peace to pay her respects, to mourn, to talk to the one she had lost, to be in that person’s presence even though they are dead: there is something reassuring about being able to do so, isn’t there – it keeps that deep emotional connection.

But on that first Easter morning, as the sun was rising upon the darkened land, Mary didn’t find what she expecting. The stone carefully placed over the entrance to the tomb by Nicodemus and Joseph of Arimathea, whom she had watched, had been moved. The body had gone. What loss – and then this.

No doubt, as she sat weeping, Mary recalled Jesus’ teaching about his death and resurrection. And yet the body had gone. Even the appearance of angels did not bring consolation. A gardener came and she poured out her distress to him. What on earth was going on?

And then one word changed everything. A word charged with emotion. A word which encapsulated all she was, covered all her confusion and distress, and brought together all her faith and hope.

When someone calls our name, it attracts our attention. We turn to face them. We respond to the voice. We recognise the person who says it. Hearing our name spoken makes us turn in the right direction. And if we are looking for someone we’ve lost, we might call out their name. And such is the joy when we find them – and such is the joy of the person who has been found.

Through the resurrection, Jesus calls each one of us by name.

Through the resurrection, each one of us has found what we are looking for.

Take a few minutes to listen to the voice of Jesus calling your name.

Write down what you feel when you turn and understand.