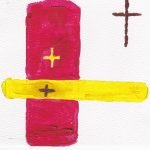 From going to Jesus for spiritual direction to defending him in front of his fellow Pharisees (see John 7:43-52), Nicodemus had discerned that this man, this Jesus, is the Messiah the Jews have been expecting. Now, in part 2 of his story, we find him in another garden:

This is a garden that is all set for a burial. A royal burial. The burial of a King – the King of the Jews, as Pilate had decreed (John 19:19-22). Pilate’s is another story we can learn from as well.

Here we have Nicodemus together with Joseph, from Arimathea in Judea. Two rich and well-respected Jewish leaders. Joseph was also a member of the Sanhedrin – and one who had not voted for Jesus’ death (Luke 23:50). Both in their own ways, were ‘secret disciples’ of Jesus although there is some (albeit disputable) evidence that Joseph had been following Christ as he preached around Judea and Galilee.

In an echo of the anointment of Jesus’ feet with expensive perfume by Mary of Bethany just six days previously (John 12: 3) the gifts of Nicodemus and Joseph of Arimathea are enormous. This is no simple bunch of flowers to lay at the grave. Nicodemus brings an huge amount of spices (probably in excess of around 30kg [70lbs] in modern terms). Joseph makes his own tomb available (Matthew 27:57-60) and provides the linen in which to wrap Jesus’ body (Mark 15:46). Then with a stone that rolls they seal the tomb which holds the body of their beloved Messiah.

Joseph and Nicodemus had emerged from the shadows to undertake a task for God. The bruised reed that was Nicodemus, the learned, yet confused, man who visited Jesus, has become a strong cedar. In this generous act of devotion, which his beloved Jewish law dictated had to be completed before sunset on that first Good Friday, Nicodemus stepped from secrecy and darkness in to openness and light. Previously unable to publicly show his devotion to the Messiah, he does so now. Unashamed. Unafraid. Unlimited in his generosity. Nicodemus had been born again.

What do you learn from Nicodemus?

In what ways has Jesus led you from darkness in to light?

Categories: A Story to Tell
Tags: bereavementdeathfinding Godloved by God