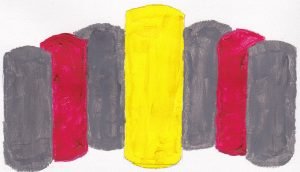 When my son was about four years old, he was playing in the street with his friends. At one point I couldn’t see him so assumed he’d gone to one of the other children’s homes – it was that type of street. It was safe. A bit later on, I looked out again – no, still not there. I called around to his friends but they didn’t know where he was. The worry began to kick in – where on earth was he? What’s happened to him? Then, after what seemed an eternity but in reality was probably only a few minutes, there he was coming down the street. Alone and crying. We ran towards each other and I picked him up: “I didn’t know where you were.” His reply was priceless: “But Daddy, I didn’t know where I was either.”

This is a significant event – a sort of ‘coming of age’: a rite of passage for the young Christ. While there were other 12 year-olds who went to the Temple to be questioned by the teachers, Jesus knew he was different. It may be that he has been told by Mary and Joseph about his miraculous conception, the flight to Egypt and the visit of the travellers but inwardly he knew this was not just the Temple: it was his Heavenly Father’s house.

Having spent family time in Jerusalem for the festival of the Passover, Joseph and Mary are setting off home to Nazareth – a journey of about 120 miles. This was a time when families and travellers intermingled with ease and without fear, being looked after and fed by others. It’s also fair to speculate that their other children, being younger, probably distracted them from realising the absence of the eldest. At the evening stopping point, they started to look for Jesus among the others who were with them.

So, they set off back to Jerusalem – a day’s walk and three whole days pass before they actually find him. Can you imagine losing someone (or being lost) for three whole days? Bad enough when it’s three whole minutes.

And when they do find him, their reaction is natural: ‘Child…’ (Oh dear, watch out Jesus, you are in big, big trouble.) ‘Child, why have you treated us like this?’ they said. ‘Look…’ (another ‘the parents are really angry’ word), ‘Look, your father and I have been searching for you in great anxiety.’ (Don’t you love the sanitised version Luke gives us!)

You get the drift. We’ve all been there (either as seeker or sought for). There’s the relief at finding someone safe mixed, as it so often is, with anger. In the heat of the moment, though, Mary and Joseph appear to forget just who their son is. They don’t understand why he was in the Temple; why he was sat talking with the teachers, listening to them and asking them questions.

Joseph and Mary responded like many parents would do. Jesus’ response is that of a 12 year-old going on 15: ‘Why were you searching for me? Didn’t you know I’d be here?’ Duh.

Tongue in cheek? Maybe. And while we can’t impose 21st century, Western adolescent behaviours on to 1st century Middle Eastern culture, such events, not for the only time, remind us that Jesus was both fully human and fully divine. Why shouldn’t he react like other 12 year-olds?

The Holy Family are a human family. This incident shows us that there are times when being holy is perhaps not that different from simply being human.

No doubt, once the emotions had settled down, the anger calmed, and a few sorries had been said, Jesus increased in wisdom and divine and human favour, as Luke’s Gospel puts it. And while it may not have felt like it at the time, Mary, and not forgetting Joseph also, would indeed have treasured these things in their hearts.

In our ordinary day to day lives we, like Joseph and Mary, will spend time with other people; we, like Mary and Joseph, will be distracted by many things; and how easy it is for us, like them, to lose the Messiah in the midst of it.

And yet all the time, what a great assurance it is to know that Jesus always knows where he is – and that place includes being right with us in all our distracted seeking.

Looking back over your last few days (or longer if you wish), and reflecting on the events and distractions of your life, in what ways were you looking for Jesus? Did you know where he was?

Or did you come to this story and think, ‘I didn’t know where I was either.’