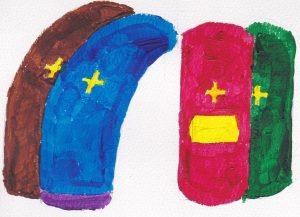 Mary and Joseph went to Jerusalem when Jesus was just 40 days old. It was the custom under Old Testament laws that parents would take their first-born son to the Temple to dedicate him to God: to ‘Present’ him. Hence why that event is sometimes called the ‘Presentation of Christ’. There, they meet, first, Simeon and, later, Anna. (Two other people with a story to tell at some other time.)

When Simeon speaks to Mary, it’s easy to forget that Joseph was also there. Joseph can get overlooked in the story of Jesus’ life but he heard those same words. The prospect of death intrudes into their time of joy. Something these parents will be reminded about a couple of years later when wise travellers from the East present their gift myrrh: an oil for embalming.

Although it’s not known how old Joseph and Mary were when they married, Jewish tradition at the time stated that boys could marry from the age of 18 and girls from aged 12. So Joseph is almost certainly older than Mary and here he is in the Temple with a baby who is not his own flesh and blood (which must still be carrying a degree of confusion in itself). He is like a stepfather, a foster parent, caring for this child as if he was his own. And here too is Mary: one who will, ultimately, outlive both her husband and her first born.

Mary. A teenage mum married to an older man. An ordinary girl called to be the mother of the Son of God. That God should choose such a person. ‘Why me?’ she might have asked. ‘Why her?’ we might say. Destined to be present at the first of Jesus’ miracles: the wedding in Cana; and at the last: his death and resurrection. By the time she’s in her 40s, she will be watching the death of the babe she now holds in her arms before Simeon. The sword will pierce her soul. What greater loss than that. It is to be a hard life. This is no easy calling. But there again, what calling ever is?

Joseph. Carpenter. Bread winner. Provider. ‘What on earth is going on here?’ he might have asked. ‘Why him?’ we might say. A descendant of David. A righteous man (Matt 1:19 KJV). One can imagine that both the confusion and the God-given resolution of the arrival of this child is probably impacting on his work. As a carpenter, his occupation had a long and honourable history in Israel stretching back to the building of the Tabernacle. He uses tools, probably some not that dissimilar to today’s. He makes furniture, works with builders, farmers and fisherman. A respected man in a respectable job. He knows this son will watch him at work and will follow in his footsteps (See also Mark 6:3 and Matthew 13:55). It’s a tough job. It’ll be hard working when you’ve got things going on at home.

Mary and Joseph. Maybe it’s a good thing they didn’t know all that was going to happen in the course of their lives – just as it is for us, really. But what stories they will be able to tell.

Spend a few minutes reflecting on how it would have been for Joseph and Mary as they left the Temple that day. Pause to reflect on what can be learnt from their lives. Their trust in God. The way God uses ordinary people. If God can use them, God can use anyone. Including you.

Think back to times when your future has been uncertain: how has God guided and supported you in such times?