Man from the Gerasenes (2) – Wholeness 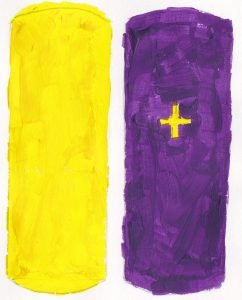 After Jesus’ intervention, the man from the Gerasenes is described as being ‘in his right mind’. (Please be aware this entry considers the sensitive topic of mental ill health.)

Many have described the man from the Gerasenes as being mentally ill. He may well have been: Mark’s account does include a reference to self-harm (verse 5). Whereas demon possession is one of spiritual distress, mental ill health is often more affected and influenced by psychological, sociological and biological factors.

Today, we’d have names for ‘people like that’ too.

Stigma about mental illness has always existed: we can read that in to the attitude of the crowd in the country of the Gerasenes. Perhaps that was why the man was ostracised and, even when healed, why he was still afraid and wanted to go with Jesus in the boat? (v18).

Thankfully, attitudes towards mental illness have improved considerably – in particular over the last two decades. Many more people now speak openly about their experience of depression, anxiety or other more severe and enduring conditions such as bi-polar disorder or psychosis. But there are still difficulties for those who experience mental ill health, not least, alas, in some areas of the church.

Although misunderstandings still exist, with one in four of us seeking help from a doctor about a mental health problem at some point in life, it is encouraging to see the increased recognition of the importance of looking after our mental wellbeing.

Being mentally unwell is not a weakness. In fact, it is often those who are the most conscientious and dedicated who experience such difficulties. Depression, for example, has been called ‘the curse of the strong’. Yes, the word ‘stress’ can be used too lightly but there are times when the pressures we all face, both in work and outside of work, outweigh our ability to cope with them – and everyone copes with stress differently.

Feeling anxious or depressed at certain times is perfectly normal. We’re bound to feel anxious if we’re facing an important exam or a relative is in hospital, for example. It’s natural to feel down or low, say, after a bereavement or the break up of a relationship. Indeed, those emotions and responses are a necessary part of who we are as human beings – and integral to our ability to cope with difficult situations.

But it is right to be concerned when those feelings or symptoms affect our ability to function. When work, sleep, family life and other everyday matters are increasingly affected, help needs to be sought.

As a general guide, if someone is experiencing feelings of depression or anxiety most of the day, every day for a fortnight then that’s the time to go to the doctor. Talk early, don’t let it get worse.

The difficulty is that a lot of people don’t seek help that quickly. We feel we ‘ought’ or ‘should’ be able to cope. We might tell ourselves ‘not to be so stupid’. Others might tell us to ‘pull ourselves together’. We might hope that if we ‘bury our head in the sand’ it’ll go away – the only thing that happens when we bury our head in the sand is we can’t breathe… we become ‘suffocated’ by whatever is causing the difficulties. Talk early, don’t let it get worse.

Asking for help is not a sign of failure. But, like with the man from the Gerasenes, paradoxically, although not unusually, the act, or even the very thought, of seeking help may feel a bit frightening at first. We may be scared of ‘what will come out’ or worried about ‘what’s wrong’ or concerned about what other people will think (especially in some church circles, sadly).

Asking for help is a sign of strength. But it is important to be realistic. If things have become difficult, it may get tougher before it’s gets easier. It’s easy to slip in to a pattern of negative thinking – and it takes time to change one’s thoughts. Medication may help but isn’t always necessary. However, it will take time and effort – which is in itself part of the reason why so many people end up struggling for so long: simply because it takes so much time and so much effort.

The good news is that people do get better. Recovery can and does happen. Unlike many physical health conditions, recovery from a period of mental ill health may not mean the complete absence of symptoms but it will see the return to a more comfortable level of day to day functioning.

What do you do to look after your mental wellbeing?