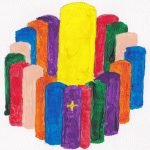 The church was full (for once). The visiting preacher had drawn a big congregation. Children played in the far corner. We sat, ready to hear the preacher’s message about the importance of inclusivity. “Children shouldn’t be allowed in church” said the voice of someone behind me. “What are those parents thinking. They should be keeping them quiet.” And on they went. An argument broke out in The Peace. “When my children came to church they were quiet. Such a shame they’ve spoiled a good service.” I received communion and left. It wasn’t the children who spoiled it.

Not only did Jesus go to children, as he did with the daughter of Jairus, he wanted children to come to him. And they did.

Children were part of Christ’s ministry on earth: whether they were brought to him by others as above or when a young boy is used by God to enable the miracle of the feeding of the 5,000 (John 6:9).

Children have been part of church life for centuries: Sunday Schools began as far back as 1780. But now we live in a very different world. A world of YouTube and iPads. Facebook and WhatsApp. Smartphones and gaming. A world where Sunday mornings hold many more enticing and exciting activities than going to ‘boring old church’.

Research shows that a church with no children or under 16s is very likely to be in decline and sadly, they are often the self-same churches whose idea of children’s work is tucked away in the far corner (noisy toys removed) or a Sunday School which hasn’t changed for decades. We live in a world where there are no children at all in a quarter of the Church of England’s congregations.

So yes, “We need more families and children” is a perfectly valid cry from many small and, often, declining and aging congregations. But there’s an inconvenient truth to be addressed… “Let’s be honest: we’re not that type of church.”

Yes, of course, there should be provision for those occasional visitors (activity bags, soft play area, Bible-based word search and quiz sheets etc). But there’s also a need to face up to the fact that children’s ministry has to engage with 21st Century children and not one which replicates the grown-up’s childhood experience. Effective children’s and young people’s ministry may simply not be within the gift of those who are in the existing congregation. That’s not a fault – it’s just the reality.

For churches in such situations, focussing their efforts on ministering and reaching out to people to whom their gifts do relate to (older adults and the newly retired, for example) may well be the better part.

But also, just like Jairus: if you can’t do it, point them to someone who can. There are many churches whose work with children and young people does match the capabilities of the adults who attend. Places where they have the skills and the expertise – and, crucially, an existing, critical mass of children, young people and adults to make it enticing, engaging and enjoyable.

When Jesus said ‘Let the little children come to me,’ he didn’t add, ‘and now take them to church.’ This is about going to where the children and young people are: with no expectation to come on Sundays. Enabling them to meet Jesus in the places where they already feel relaxed and secure. Taking the message out: not expecting them to come in.

We are to take children and young people towards Jesus’ arms, in order to have his hands laid upon them and to be blessed. Blessed with a love that tells them they are precious and special. A love that tolerates their moods. A love that lets them be noisy. A love that rejoices with their singing and dancing. A love that heals and comforts. A love that accepts them for who they are.

What story is your church enabling children and young people to tell?

Categories: A Story to Tell
Tags: acceptancechildrenchurchloveloved by Godolder people